Bt – A Little Chametz Works Its Way Through the Whole Batch of Dough 5: 7-12

A Little Chametz Works Its Way
Through the Whole Batch of Dough
5: 7-12

A little chametz works its way through the whole batch of dough DIG: What is Paul’s tone here in verses 7-12? Why does this issue move him so strongly? How did he go from being accepted to an enemy? What went wrong? What is chametz (leaven) a symbol of? How does Paul use it in his letter to the Galatians? What were the Judaizers confusing the Galatians about? What were they saying about Paul? How was the fact that Paul was being persecuted disprove their lies? How was the cross a stumbling block to the Judaizers? How is it a stumbling block to people today?

REFLECT: How is your race going? Have you stumbled lately? Have you gotten up, dusted yourself off, and gotten back in the race? How so? Is there any chametz in your life right now? How about in your family? How about in your Messianic synagogue or church? What should you do when you find it? Is there any legalism in your place of worship? How would you recognize it in the first place? What can you do about it?

Employing a metaphor he was fond of, Paul described the Galatian believers’ experience as a race. They had begun their race well, but someone had blocked them, cut in on them, causing them to break stride and stumble. After exposing the false dangers that threatened the Galatians, Paul now exposes the wicked character of the men who espoused the doctrines.

Paul was fond of athletic illustrations and used them often in his letters. His readers were familiar with the Olympic Games as well as other Greek athletic contents that always included footraces. It is important to note that Paul never uses the image of the race to tell people how to be saved. He is always talking to believers about how to live a godly life. It is important to note that a person had to be a citizen to participate in the Greek games. We became citizens of heaven through faith in Messiah, then the Lord puts us on our course, and we run to win the prize (Philippians 3:12-21). We do not run to be saved; we run because we are already saved and want to fulfill God’s will in our lives.131

You were running a great race (to see link click Bf – O Foolish Galatians, Who has Cast a Spell on You)! When Paul first came to them, they received him as an angel from God (Galatians 4:14). They accepted the Word, trusted the Lord Yeshua Messiah, and received the Ruach ha-Kodesh. They had a deep joy that was evident to all, and were willing to make any sacrifice to accommodate Paul. But now, Paul was the enemy. What happened? Who blocked you, cut in on you, from following the truth? This detour doesn’t come from the One who calls you. The doctrine of faith plus works does not come from ADONAI. They had switched from operating in the sphere of faith to operating in the sphere of Torah (5:7-8). 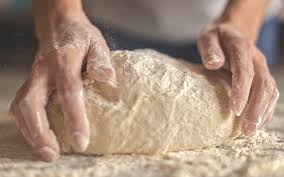 Paul then changed his figure of speech from athletics to cooking. A little chametz works its way through the whole batch of dough (5:9)! Chametz is generally pictured as a symbol of evil in the TaNaKh. During Pesach, for example, no chametz was allowed in the house (Exodus 12:15-19 and 13:7). Worshipers were not permitted to mingle chametz with sacrifices (Exodus 34:25), though there were some exceptions to this rule. Yeshua used chametz as a picture of sin when He warned against the chametz of the Pharisees and Sadducees (Matthew 16:6-12). And Paul used chametz as a symbol of sin in the church at Corinth (First Corinthians 5). Chametz is really a good illustration of sin: It is small at the beginning, but if left alone, it grows and permeates the whole. It always costs you more than you want to pay, and takes you further than you want to go. The false doctrine of the Judaizers (see Ag – Who Were the Judaizers?) was introduced to the Galatian churches in a small way, but before long, the chametz grew and eventually took over. But once deeds are added to the simple gospel of faith plus nothing, it is corrupted and there is no end to it.

But the one who is confusing (Greek: tarasso, meaning to disturb the faith of someone) you will pay the penalty, whoever he is (5:10b). Whoever this one was, because he stood against ADONAI and His truth, he, along with the other Judaizers, would carry the full weight of their own judgment for disturbing the faith of the Galatians. False teachers often cause many others to follow their immoral ways, and as a result the way of the truth will be maligned. In their greed they will exploit you with false words. But their judgment from long ago is not idle, and their destruction does not slumber . . . the Lord certainly knows how to keep the unrighteous being punished until the Day of Judgment (Second Peter 2:2-3 and 9).

The one who was confusing the Galatians, and the Judaizers were saying that Paul was still preaching circumcision when it suited his purpose. Paul answered this charge by calling attention of the Galatians to the fact that he was still being persecuted, implying that it was because he was against legalism. The implication is clear that Paul at one time, before he was saved on the road to Damascus (see the commentary on Acts Bc – Sha’ul Turns from Murderer to Messiah), preached the necessity of circumcision as a means of acceptance with God. There is no evidence that he included circumcision in his preaching after he was saved. It is clear that he made a clean break with legalism as a method of salvation before he started his ministry.

The persecution of Paul had its basis in the fact that the cross was an offense to the Jews. What made the cross so offensive to them? If I still proclaim circumcision, then the stumbling block of the cross has been eliminated (5:11). In other words, if circumcision was preached as one of the prerequisites of salvation, then the cross of Messiah would cease to be an offense. The offensiveness of the cross to the Jew lay in the teaching that believers in Yeshua are free from the legalism of perfectly obeying the 613 commandments of Moshe. That was the very point of contention when the Great Sanhedrin (see the commentary on The Life of Christ Lg – The Great Sanhedrin) was trying Stephen. Their charge was not that he was worshiping the Crucified One. But that he was preaching blasphemy against the Temple, circumcision, and legalism (Acts 6:13-14). All of which goes to show that the Jew of the first century had perverted the Torah, salvation is, and has always been, by faith-plus-nothing.

The cross still offends people in the world (First John 2:15-16) today for the same reason. Whether Jew or Gentile, all mankind is prone to trust in what they can do for themselves and are offended when told they can do nothing at all to make themselves right before God. To preach the cross invites persecution because it is the supreme offense to righteousness through deeds. But as Peter boldly proclaimed before the Great Sanhedrin: There is no salvation in no one else, for there is no other name under heaven given to mankind by which we must be saved (Acts 4:12)!

Paul was only human, and he became so upset at the false teaching of those Judaizers that he exploded: I only wish those who are agitating you would castrate (Greek: apokopto, meaning bodily mutilation, to cut off) themselves (5:12)! Paul expresses the wish that the Judaizers would not stop at cutting off the foreskin, but would go on to cutting the whole thing off for all the good it would do! If cutting off a little bit of skin would improve your standing before God, why stop there? Why not cut a lot of skin off! Obviously, he was using exaggeration to make his point that no amount of cutting would result in justification.132

From what Paul has said so far, a question could legitimately be raised. What shall we say then? Are we to continue in sin so that grace may abound? But Paul answered his own question: May it never be! How can we who died to sin still live in it (Romans 6:1-2)? If I am saved by grace, can I do anything I want to? Is that what our freedom in Messiah really means? So to make sure that he is not misunderstood, Paul now deals with this issue of freedom in the next file.